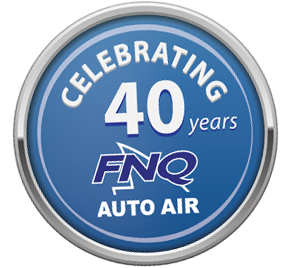 Frequently asked questions
What is a compressor?

Basically the compressor is the component that pumps the refrigerant around the system. More often than not it is mounted to the engine block and driven by a belt from the crank pulley. Faults associated with compressors are leaking seals and gaskets, bearing noises, broken valves and in the worst case complete failure. As they can be a fairly expensive item to replace, we will generally attempt to repair or recondition a faulty compressor wherever possible instead of just replacing it with a brand new one.

What is an evaporator?

The evaporator coil is located within the cabin of the vehicle and is the part that deals with the actual cooling side of an air conditioner. They are a heat exchange unit made up of tubing and fins similar to a car radiator. Refrigerant passing through the coil is extremely cold and absorbs heat from the air which is forced over the surface of the evaporator. This cool, dehumidified air is then ducted into the cab. Because a majority of evaporators are constructed from aluminium, which is prone to electrolosis and corrosion, the main problem found with these components are refrigerant leaks. Where it is viable option, and depending on the state of the aluminium and whether the leak is accessable, all attempts will be made to repair the problem rather than replace the evaporator. Another often overlooked problem when diagnosing an air conditioning system is the fact that over time the evaporator coils tend to become rather dirty, the fins that the air passes through become clogged causing the air to blow around the coil rather than through it, dramatically effecting the cooling efficiency of the system. It is usually worth the exercise of removing the evaporator to clean and inspect it for leaks every so often as part of a general system service depending on the road conditions that the vehicle usually operates on.

What is a condensor?

The condensor is the part of the system where the heat that is removed from the cabin of the vehicle is dissipated. They are in most cases situated in front of the radiator, where they are able to receive maximum possible airflow, which is essential for their operation. As they are usually constructed from aluminium, refigerant leakage is the most common fault associated with this component. However other problems can arise when the fins that direct the airflow across the condensors piping becoming blocked with dirt, grass and other debris. This can result in exccessive pressures within the system which leads to inefficient operation and possible damage to other components.

Why should I take my vehicle to an air conditioning specialist?

What does it cost for a quote?

When you first bring the vehicle to us, we will conduct a free diagnosis to determine what is wrong with the air conditioning system. From this we can give you an estimate of the costs involved for repairs. www.fnqautoair.com/images/leadin-apc.html

Will I receive a higher bill than what you quoted when I come to pick up my vehicle?

Every effort is made when conducting a diagnosis of your system to try and determine all faults with it. Our explanation of the estimated cost of repairs will summarise all that was found and also include any possible problems that may be encountered once work is commenced on your vehicle. If for some reason a problem arises that was not allowed for in the quote we will attempt to contact you immediately before any other work proceeds.

How much is a regas?

This is not an easy question to answer. If the system is low in refrigerant it has most likely developed a leak. Where the leak is located and what has to be done to rectify the problem will dictate what sort of cost you are looking at. If a leak is not repaired you will only be wasting your money by regassing the system, as the system will simply lose the refrigerant again.

How often should the system be regassed or serviced?

Servicing and regassing can be viewed as two different proccesses. Contrary to what a lot of people believe, the gas (refrigerant) within an airconditioning system is not used up or consumed by the general operation of the air conditioner. If the system is found to be low in refrigerant then it is most likely to have developed a leak in one or more of its components. If this is the case then a diagnosis and quote for repairs would be required. Servicing of an airconditioner generally describes the procedure whereby the systems filter and refrigerant are replaced, the condition and level of the refrigerant oil is checked, thermostats and drive belts are checked and adjusted as necessary, and the general condition and performance of the system is surveyed.

What is a drier and why should it be replaced?

The correct name for this component is Filter Drier Receiver. As the name would suggest, it acts as a filter for the refrigerant trapping any foreign debris within the system. It also contains a dessicant, similar to silica gel, that removes any moisture that may be present,Yellow Gold Rolex Yacht-master II Replica this is fairly critical as moisture can not only effect the efficiency of the air conditioner but also damage other components. It is reccomended that the drier be replaced when ever the system has been open to the atmosphere or as part of a general service every twelve to eighteen months. The reason for this is that the dessicant, which comes in the form of small pellets, has only a limited capacity in how much moisture it can absorb, and over time the pellets will eventually break down into a powder that is able to be flushed out of the drier into the rest of the system causing failure and possible damage to other components.

Some of our clients include:

We ensure that our staff are trained in customer relations and it is an integral part of our company policies. In diagnosis we ensure that our explanations are jargon free and that our clients fully understand the problem and our proposed solutions.

From warranty and service work to the design and installation of a refrigeration system, our specialist trained staff backed up by a 24hr emergency breakdown service can limit your down time and get you back on the road as soon as possible.

A competitive spare parts market can result in the importation of cheap and inferior goods, we ensure that all products that we use, and sell are suitable for the extreme climatic conditions we face in North and Far North Queensland.

READ MORE
We are service agents for: